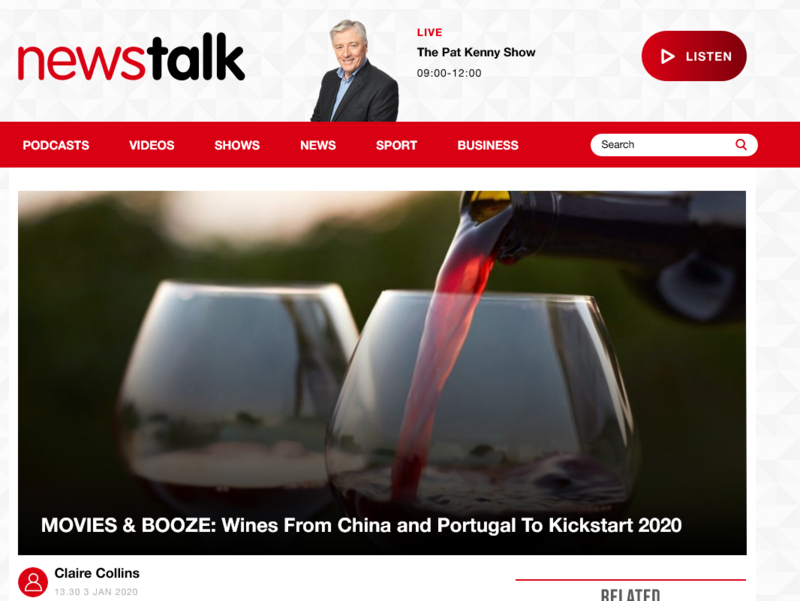 NEWSTALK - The Moncrieff Show – Movies & Booze| Starting the 2020 wine year off with a Chinese white wine! Podcast with By Rose Murray Brown MW

Sean Moncrieff’s programme on Newstalk, Ireland’s National talk radio station, has a cult following. Sean’s programme takes an irreverent look at life but is topical and can be serious about current affairs. The Movies & Booze slot started shortly after Sean started working with Newstalk in 2006 and is, to date, the longest standing regular feature. The premise is simple, review two films and two wines in a 60 minute slot, while engaging with the audience via FB, twitter, email and text.

Newstalk is the only radio station in Ireland to commit to a regular wine slot, which is part educational, part irreverent, but mostly fun. It is promotion through education thought in a light-hearted way. There are three wine slots every month and one slot featuring craft beer, presented by Dean McGuinness who is an importer of specialist beers. The wine presenters of Movies & Booze are Jean Smullen, Mick O’Connell MW and Tomas Clancy who alternate each month, presenting once or twice a month as the schedule requires.

The audience for Moncrieff is predominantly AB1 males (25-50+) with a daily national audience of 96,000 , it outperforms the Irish Times with who have a daily readership of c 68,000 for the same audience.

Listen to the podcast