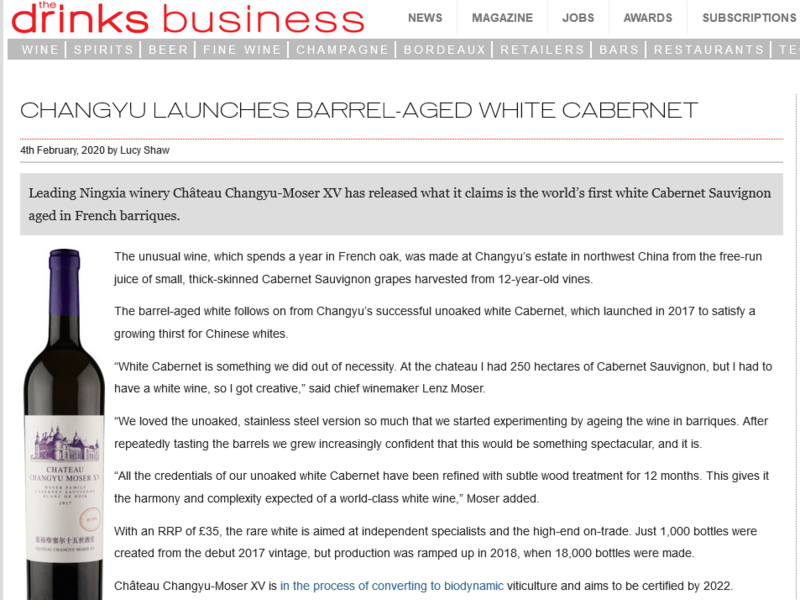 The unusual wine, which spends a year in French oak, was made at Changyu’s estate in northwest China from the free-run juice of small, thick-skinned Cabernet Sauvignon grapes harvested from 12-year-old vines.

The barrel-aged white follows on from Changyu’s successful unoaked white Cabernet, which launched in 2017 to satisfy a growing thirst for Chinese whites.

“White Cabernet is something we did out of necessity. At the chateau I had 250 hectares of Cabernet Sauvignon, but I had to have a white wine, so I got creative,” said chief winemaker Lenz Moser.

“We loved the unoaked, stainless steel version so much that we started experimenting by ageing the wine in barriques. After repeatedly tasting the barrels we grew increasingly confident that this would be something spectacular, and it is.

“All the credentials of our unoaked white Cabernet have been refined with subtle wood treatment for 12 months. This gives it the harmony and complexity expected of a world-class white wine,” Moser added.

With an RRP of £35, the rare white is aimed at independent specialists and the high-end on-trade. Just 1,000 bottles were created from the debut 2017 vintage, but production was ramped up in 2018, when 18,000 bottles were made.

Château Changyu-Moser XV is in the process of converting to biodynamic viticulture and aims to be certified by 2022.