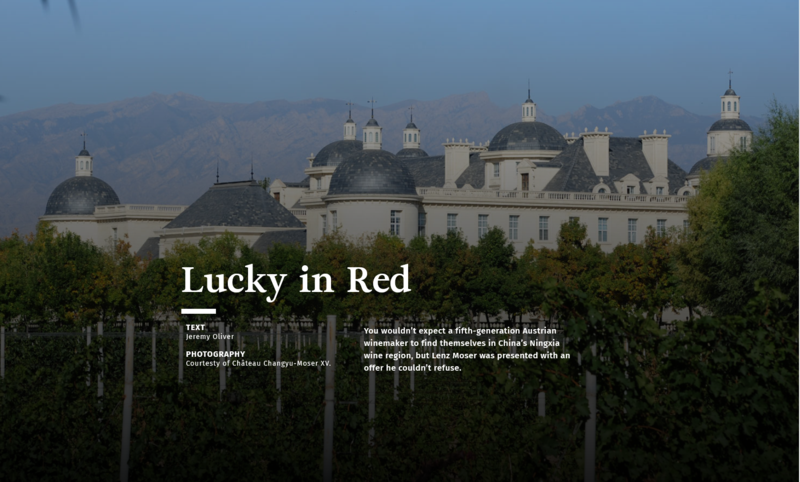 China, we know, is full of surprises, so why should anyone cock a brow when they learn that one of the grandest and most opulent Bordeaux-inspired winery constructions in the entire country shares its name with a 15th-generation Austrian maker of grüner veltliner?

Its consultant winemaker is the energetic and engaging Lenz Moser, who for the past five years has been responsible for making Changyu’s wines and taking them to the world.

Even before their partnership, Moser had a relationship with Changyu’s winemaking team. Changyu was fighting the odds to sell Moser’s Austrian white wines in China while Moser was trying to distribute their wines in Europe.

Then, in Moser’s words, Changyu’s chairman expressed frustration that the company hadn’t achieved a breakthrough in Europe, and both agreed that quality was the issue. The chairman asked why couldn’t Moser make a wine from Changyu’s finest fruit to take to the world? The ambition was thus forged and the agreement was made.

The first Changyu-Moser XV Cabernet Sauvignon was released in 2015 from 2013 vintage. Since he stepped into the lead role, Moser has refined the wine – the 2016 vintage that I tasted married plushness and polish with genuine elegance and shape. Its backbone is fine and supple, and with the small berries at his disposal, he expects to build more structure in the future.

“Ningxia is extremely dry and I’m working with the smallest cabernet fruit I have ever worked with,” says Moser. “We get great skin-to-juice ratio, and the thick skins have an abundance of flavour, colour and tannins. We’re at 1,100 metres altitude and only get 150 millimetres of rain annually, so it’s all irrigated.

“The one and only challenge is that we need to bury the vines over winter, burying in November to around 30 to 40 centimetres of soil and unburying in March. We grow the canes at about 45 degrees to the vertical so at least we don’t have to bend them over 100%, which would increase the chances of them snapping. Given all that, since about 2009, I’ve been convinced this might be the hotspot of winemaking in China.”

The soils are around 60 to 70 centimetres of sandy loam and Moser is dead keen to “exploit their terroir and possibilities to the max”. With only around 10 to 20 days of what you can really call autumn, Ningxia presents unique challenges, typically related to achieving full late season ripening and true phenolic ripeness.

Moser, however, reckons his fruit gets the same hang time or longer than that in Bordeaux, saying his biggest challenge was to get the vineyard workers to harvest after the Moon Festival holidays in early October.

In March last year, Moser travelled the world to launch the 2016 Purple Air Comes From The East Cabernet Sauvignon. At the time of writing, I was yet to taste this wine, which was limited to just 6,300 bottles, so I couldn’t say if it’s on the same plane as the Shangri-la, LVMH’s Ao Yun, or Helan Qingxue’s Baby Feet cabernet-based wines – the finest I have seen from China to date. But I’m thinking I’m in for a pleasant surprise.