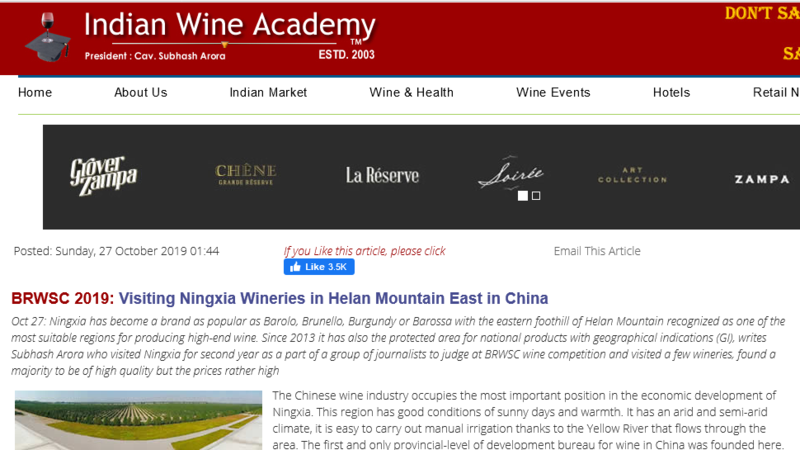 Oct 27: Ningxia has become a brand as popular as Barolo, Brunello, Burgundy or Barossa with the eastern foothill of Helan Mountain recognized as one of the most suitable regions for producing high-end wine. Since 2013 it has also the protected area for national products with geographical indications (GI), writes Subhash Arora who visited Ningxia for second year as a part of a group of journalists to judge at BRWSC wine competition and visited a few wineries, found a majority to be of high quality but the prices rather high.

The Chinese wine industry occupies the most important position in the economic development of Ningxia. This region has good conditions of sunny days and warmth. It has an arid and semi-arid climate, it is easy to carry out manual irrigation thanks to the Yellow River that flows through the area. The first and only provincial-level of development bureau for wine in China was founded here. The government gives great support to the technical training, seedling introduction and infrastructure such as land, road and water and power utilities construction. The wines produced in this region have won many awards in both domestic and international wine competitions, and have attracted big investments, making Ningxia a star region in China.

During the 4-day stay, I visited the following wineries in the Ningxia Hui Autonomous Region and tasted their wines besides visiting vineyards and wineries. Here are the wineries visited:

Founded in 1892, Changyu is the oldest wine producer in China and has become the largest wine producer in Asia and the fourth largest in the World. Changyu Moser XV opened in 2013 in Yinchuan at a cost of $70 million. The government-supported winery, Changyu roped in Lenz Moser, the  15th generation winemaker from Austria who lent his name to the winery.  He claims he has no stake in the equity of the winery.

This Winery produces the most high-end wine of Changyu Company. At present, the wines have been exported to many countries in Europe including France and received much praise from leading wine tasters. Keeping in touch with the reality, the wines have been priced at realistic levels too. I had visited the winery last year and was very impressed with the Bordeaux style Chateau at enormous costs. The museum is also world class but despite the busloads of tourists the number is still between 25000-30,000 visitors (compare with Sula Vineyards in Nashik India welcoming 350,000 visitors every year), I was told; there are hardly any tourists in winter starting from October end and till March-coincidentally the time when the vines need to be buried under snow when the temperature touches  -20°C. It was a shock when the guide told us there were no instructions for tasting.

When I met Lenz in Europe later on two occasions, even he found it hard to believe. He promised that on the day I visited the winery next, he would personally be there and conduct the tasting. Sure enough, he caught the flight and arrived directly from the airport where we were being shown the winery by the assistant winemaker. The guided Tasting of 4 wines in the professional Tasting  room was a highlight of the visit to all the wineries, with Lenz answering all questions in simple, understandable English and was very forthright in his opinion. No wonder, a significant chunk of the 600,000 bottles are being exported in several countries including Dubai where one hotel with 11 restaurants is serving their wines in all the restaurants.