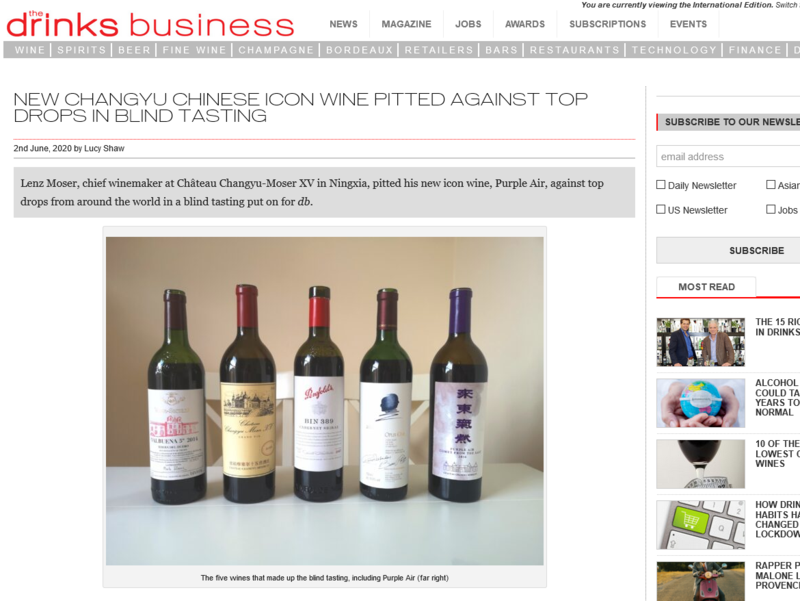 Lenz Moser, chief winemaker at Château Changyu-Moser XV in Ningxia, pitted his new icon wine, Purple Air, against top drops from around the world in a blind tasting put on for db.

Keen to prove that Purple Air can stand shoulder to shoulder with some of the world’s top wines, Moser pitted the inaugural 2016 vintage of the wine against the likes of California icon wine Opus One 2016, the 2014 vintage of Vega Sicila’s second wine, Valbuena, and Penfolds Bin 389 Cabernet/Shiraz 2017.

Just 6,300 bottles of Purple Air 2016 were made at Changyu’s flagship winery in Ningxia, northwest China.

“It’s a wine which I believe is the future of Ningxia. We worked hard to bring this new style of wine to life. It’s very harmonious and more fruit-driven than anything else.

“I tried to bring out the bright fruit of Ningxia Cabernet in a very subtle form that’s lighter in alcohol. I’ve worked hard on it, reducing the wood treatment to bring out the typicity of the region,” Moser said.

“I couldn’t resist making an icon wine. It has a very Chinese-looking label and it is going to raise the bar again for the chateau. We have a clear vision – to ensure that the wines of Changyu-Moser XV are not just among the very best of China, but also belonging in the company of the world’s finest,” he added.

Only grapes from the best parcels at Changyu’s estate were selected for the wine, which is aged in new French oak for 24 months.

The striking purple label was created by a Chinese calligrapher, with each character representing the name of the wine, which means ‘bringing fortune and luck from the East.’