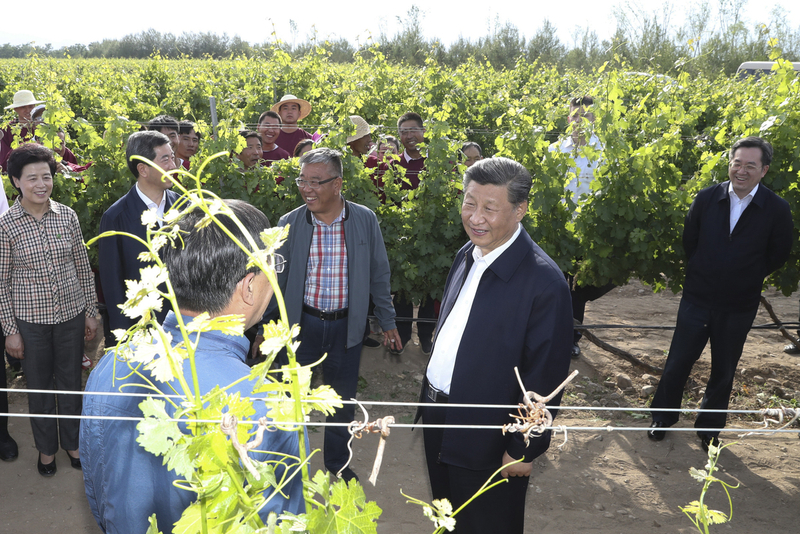 President Xi Jinping learns about local efforts in ecological conservation during his visit on Tuesday to a vineyard at the foot of the Helan Mountains in Yinchuan, Ningxia Hui autonomous region. WANG YE/XINHUA

Local governments should make efforts to overcome the effects of COVID-19 and prioritize the work of bolstering employment and improving people's livelihoods, President Xi Jinping said on Wednesday.

Xi spoke as he wrapped up a three-day inspection tour of the Ningxia Hui autonomous region, a less-developed inland region. About 37 percent of the population belongs to the Hui ethnic group.

He visited a village, a community, a section of the Yellow River, a rural ecotourism park and a vineyard to learn about work done in disease prevention, poverty reduction, environmental and ecological protection and ethnic unity.

Xi, who is also general secretary of the Communist Party of China Central Committee, instructed local authorities to fully implement decisions of the CPC Central Committee and take tough steps to forestall and defuse major risks, carry out targeted poverty alleviation and prevent and control pollution.

Local governments should uphold the people-centered development philosophy and help the people to address their problems, Xi said.

The president stressed the importance of securing jobs for major groups including laid-off workers, college graduates, migrant workers and veterans.

Xi instructed local authorities to further deepen reform in all areas, seize the great opportunities in building the Belt and Road and boost opening-up to pursue higher-quality growth.

He stressed the importance of poverty reduction, saying continuous efforts must be made to achieve the goal of eliminating poverty as scheduled. The government should help people relocated from poor areas secure a stable life and find ways to become better off, he said.

Xi reiterated the importance of upholding the concept that "lucid waters and lush mountains are invaluable assets", saying that the government should focus on the protection of the environment and ecological restoration of the Yellow River.

The government should promote balanced development of compulsory education in urban and rural areas, Xi said. He also called for speeding up work on the public health system and carrying out extensive health campaigns.

The government should uphold the Party's basic principles on religion work and handle administration of religion issues in accordance with the law, he said, adding that authorities should promote implementation of the Civil Code.

Noting that firm belief is the source of strength for the Party to move forward, Xi called on all Party members to stay true to their original aspiration and keep their mission firmly in mind.

Bringing benefits to the people is the most important mission for officials, and the misbehavior of formalism and bureaucracy must be opposed, Xi said. He added that continuous anti-graft measures must be taken to create a clean environment for entrepreneurship.

While visiting the Yellow River in Wuzhong on Monday－the fourth time he visited the river in less than a year－Xi called it the mother river of the Chinese nation and a precious resource for the development of Chinese civilization.

Ningxia authorities should shoulder their responsibilities, pay greater attention to protecting the Yellow River and coordinate major projects along the river to improve the natural environment, he said.

On Tuesday, Xi visited a rural ecotourism park and vineyard near the Helan Mountains to learn about the development of local agriculture and efforts to strengthen the ecological conservation of the mountains.

Planting should be adjusted to better protect water resources, he said, noting that Ningxia people have long been blessed by the Yellow River.

Duan Changqing, a professor at China Agricultural University, said he gave a briefing about the grape plantation, wine production and ecological restoration while Xi visited the vineyard.

Planting grapes and developing the wine industry in dry areas not only can protect the environment but also increase the income of farmers, which demonstrates the president's concept of "lucid waters and lush mountains are invaluable assets", Duan told China Daily.