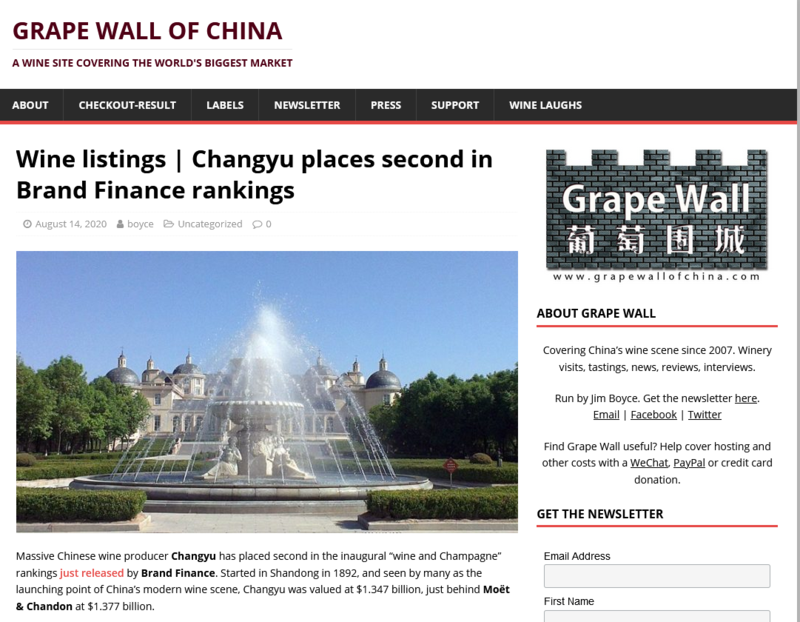 Massive Chinese wine producer Changyu has placed second in the inaugural “wine and Champagne” rankings just released by Brand Finance. Started in Shandong in 1892, and seen by many as the launching point of China’s modern wine scene, Changyu was valued at $1.347 billion, just behind Moët & Chandon at $1.377 billion.

Changyu was the lone non-Champagne maker in a top-five that also included Chandon, Veuve Clicquot and Dom Pérignon.

Here’s the Brand Finance blurb, although it seems they got their dates mixed up as Changyu, as best I know, started in 1892 due to the efforts of returning overseas businessman Zhang Bishi.

“Chinese winery, Changyu closely follows Moët et Chandon in second place in the Brand Finance Champagne & Wine 2020 ranking, with a brand value of US$1.3 billion. Founded in 1819 during the Qing Dynasty, Changyu is China’s oldest and largest winery and is one of the most prolific brands both domestically and abroad. Ranking highly for familiarity and reputation and enjoying a high profit margin, Changyu has spent the last few years expanding its reach by building numerous European-style chateaux across China and increasing its exports to Europe and Australia.”

Changyu has a sprawling empire both in China and abroad. Here it has major operations in the provinces / regions of Shandong, Liaoning, Hebei, Ningxia, Shaanxi and Xinjiang. It’s relatively new Wine City is capable of pumping out well over 100 million bottles per year.

Changyu has also expanded its global presence over the past decade, including investments in properties like Chateau Liversan (France), Marques del Atrio (Spain), Kilikanoon (Australia) and Bethwines (Chile).

For a look at one China property, check out these 60 photos of Changyu-Moser XV in Ningxia.