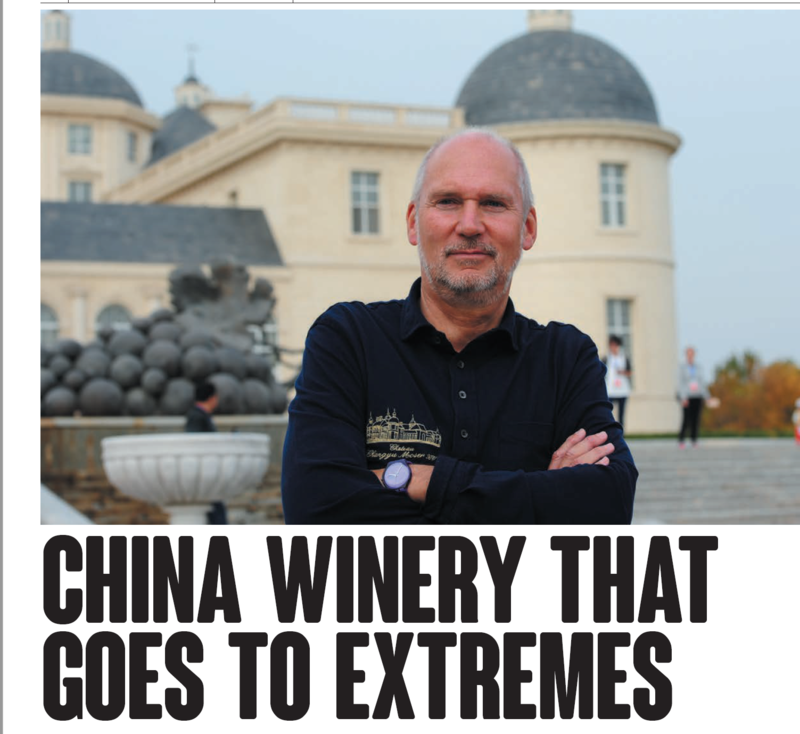 An Austrian winemaker is bidding to make China famous for quality Cabernet after
launching an ambitious project in the landlocked region of Ningxia. Chateau Changyu Moser lies just south of Mongolia, in a desert climate that receives 3,00 hours of sunshine per year. It gets so cold in the winter that the team is forced to bury the vines underground. They are uncovered in late March and start budding immediately. Chateau Changyu Moser is the brainchild of Lenz Moser, whose family has made wine in Austria since . He rst went to China  years ago in an eort to convince the country’s leading wineries to import his wines and sell them on the local market. China’s largest
producer, Changyu, agreed to the proposal, but in return Moser was asked to sell its wines in export markets. Securing repeat orders was a struggle as the quality was not up to scratch. “Fieen years ago, there was not much fun in drinking too much Chinese
wine,” says Moser. “Everybody who was an expert at the time will second that.” He helped Changyu improve the overall quality of its wines, and the leadership team asked him to set up a winemaking project from scratch. The aim was to make wine of signicantly higher quality than anything China was producing at the time. Moser relished the challenge, and identied Ningxia as the perfect location.

He snapped up a ha plot in  and put a team in place. The chateau itself looks like it should be in the Loire Valley, but Moser takes his inspiration from Bordeaux. Moser aims to produce high-end Cabernet that can compete with the best Bordeaux blends in international markets, and he has already enjoyed considerable success. Chateau Changyu Moser is sold in ¢ countries around the world, and its flagship wine – Purple Air Comes from the East  – has secured a listing at London retailer Hedonism, with a £
price tag. “I was working on Purple Air from day one in order to prove the point that this region and this chateau will play in the top leagues as well,” says Moser. “It had to be elegant and fresh and convey the typicity of the area. We only produced ,¥ bottles of the to begin with, but I have now a weapon in my arsenal where I really can target the top end of the market and benchmark myself with other top-end wines – not in order to impress people, but to let them judge.”