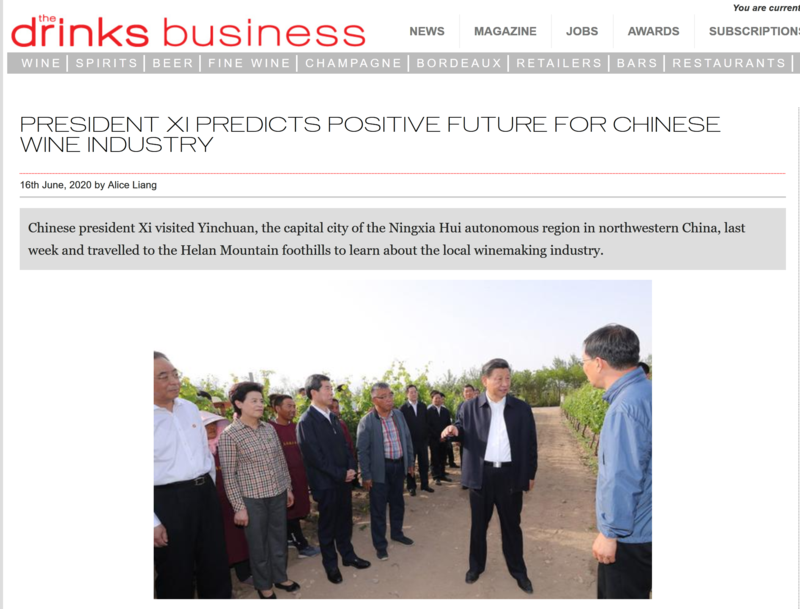 Chinese president Xi visited Yinchuan, the capital city of the Ningxia Hui autonomous region in northwestern China, last week and travelled to the Helan Mountain foothills to learn about the local winemaking industry.

The purpose of Xi’s inspection tour to Ningxia was to enhance efforts to alleviate poverty. In one of his stops, he dropped by the wine region of Helan Mountain, and visited Chateau Zhihui Yuanshi, a local winery founded in 2008.

The winery, as one of the most popular tourist spots in Ningxia, boasts significant architectural features, as the complex is built from displaced rocks from the Helan Mountain.

According to Ningxia Daily, after learning about the vinification technology, marketing promotions and workers’ average salary in Ningxia, Xi emphasised the positive future he can see in the Chinese wine industry as the living standards of Chinese people improve year by year. The development of the Ningxia wine industry goes hand in hand with the tightened management of Yellow River, and can strengthen the ecological restoration and eventually create comprehensive benefits and added value for the region.

The winemaking industry in Ningxia started in the early 1980s. The planting base is located on the alluvial plain of the eastern foothills of Helan Mountain. The soil composition is complex, featuring sand, lime, chalk and gravel, making it suitable for wine grape cultivation. The continental climate of the region also favours the process.

From big producers such as Chateau Changyu Moser XV, to boutique wineries like Helan Qingxue Vineyard, some of the wineries are emerging internationally as its wine quality is getting well recognised. Changyu’s wines are one of President Xi’s choices to serve foreign guests at official Chinese functions.