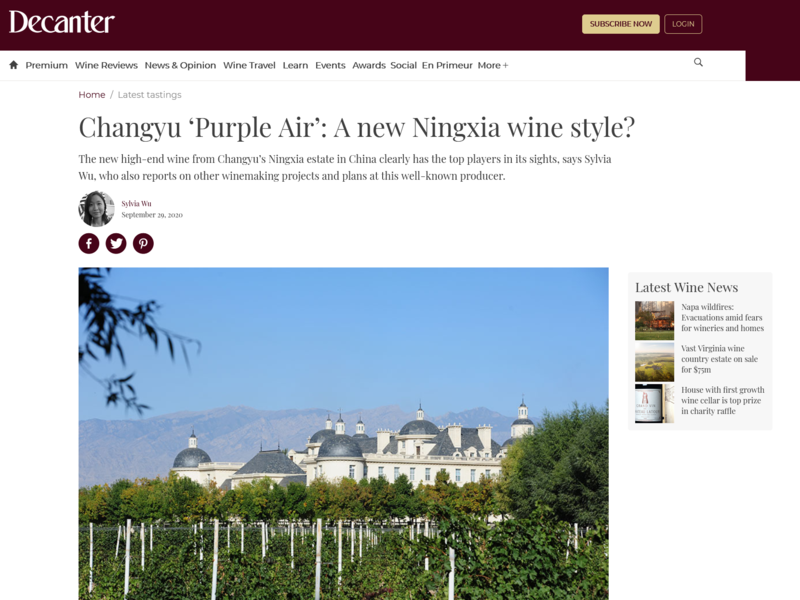 The new high-end wine from Changyu’s Ningxia estate in China clearly has the top players in its sights, says Sylvia Wu, who also reports on other winemaking projects and plans at this well-known producer.

It all started as a ‘secret project’ when Lenz Moser became fully involved in winemaking at Chateau Changyu Moser XV (CCMXV) in 2015, following a decade of collaboration in sales and marketing with Changyu, China’s largest winemaking company.

The premium project only ‘got serious’ from the 2016 vintage. Moser selected grapes from a small fraction from the 250 hectares (ha) of vines managed by the producer, with the initial goal to make 12,000 bottles of premium red wine that ‘can play [in] the top league of China’.

‘We had to work with what’s there,’ said Moser, a winemaker and marketeer from Austria.

The wine, named ‘Purple Air Comes from the East’, is 100% Cabernet Sauvignon and constitutes a blend of 10 of the best parcels of vines handled by the estate.

That includes the 60ha of vines surrounding the estate’s landmark castle but also the additional 190ha of contract vineyards 20km away.

Scroll down to see reviews of CCMXV’s 2020 new releases

At the point of blending 18 months ago, Moser said that he and the winemaking team tasted every barrel, seeking to make a wine that’s ‘elegant in style but still has enough power to carry it through’.

Moser was keen to stay away from the ‘blockbuster style’, which has been a rather common feature of wines from the Ningxia region’s Helan Mountain East foothills – an area that gets more than 3,100 hours of sunshine per year.

At the first taste it was a more fruit-driven red wine with greater freshness and less oak spice when compared to the estate’s grand vin of the same vintage.

Ageing in 100% new French oak for 24 months has given the ripe and concentrated core of black fruit a smooth, velvety texture.

Purple Air sits at 14.3% abv, almost a whole degree lower than the grand vin, which is in-line with the global trend for lighter winemaking.

In this tasting, the wine improved when given some time after opening, offering a sleek, ripe and fresh palate. The estate’s grand vin from the same vintage still has a rough edge.

The Covid-19 pandemic delayed the release date of Purple Air in the UK, and saw the US release postponed until 2021.

However, new winemaking talent has also come to the fore at this almost decade-old estate.

Emma Yu, a 32-year-old winemaker trained in Montpellier and who has worked at wineries in Germany, has joined Changyu Moser XV as assistant winemaker for three vintages now.

She will lead winemaking at the chateau for the 2020 vintage, said Moser, explaining that he won’t be able to return Ningxia from his homeland in Austria for harvest, due to Covid travel restrictions.

‘She received [a] brilliant education (in wine). All she needs is someone like me mentoring her,’ said Moser. The expectation is for Yu to become the head winemaker of the estate in five years from now.

The two have been in close contact on a daily basis to ensure the work in the vineyard and the winery is done as usual. Thankfully, with drastic measures taken at an early stage of the pandemic, the impact of Covid-19 was minimal in this part of the world, Moser said.

Innovation to watch: From blanc de noir to Grüner

To appeal to more wine lovers, Moser wanted to make sure that the Ningxia operation of the enormous Changyu group offers a white wine.

That idea resulted in the estate’s Blanc de Noir Cabernet Sauvignon, which won a Gold medal in the 2019 Decanter World Wine Awards, which is now available at Ocado for £17 per bottle.

This year Moser took the project a step further by rolling out an oaked version of the Blanc de Noir.

Similar to the Purple Air, the Moser Family Cabernet Sauvignon Blanc de Noir also has a purple capsule. Only 1,000 bottles of the 2017 vintage were made as a trial, with 15,000 bottles set to come from the 2018 vintage.

The oaked blanc de noir has a rich character and oily texture, with red berry fruits and sweet vanilla on the nose. However, the 14% alcohol feels rather heavy on the palate and perhaps a bit more emphasis on freshness could give it extra lift.

Currently, 95% of the estate’s vineyards are planted with Cabernet, with small plantings of Merlot and Syrah.

Moser said he was also willing to give Marselan a try.

The variety, which has been named by some aspiring local winemakers as the potential signature grape of China, is deemed as an ‘interesting blending component’ by Moser.

Moser added that he was keen to bring Grüner Veltliner to Ningxia, inspired by Wang Fang, of the region’s Kanaan Winery, who pioneered quality Riesling grown in the foothills of Helan Mountain.

The cool nights and clay soil in parts of Ningxia should constitute ‘familiar’ territory for the variety, said Moser. He suspects that the Chinese Grüner could be more opulent than the classic Austrian version.

In the ancient Chinese idiom, ‘purple air’ hints at the aura of the saints, which is believed to bring luck and fortune.

Priced at £150 per bottle, the ‘Purple Air Comes from the East (P.A.C.E.)’ clearly has Lafite’s Long Dai from Shandong and Moet-Hennessy’s Ao Yun from Yunnan in its sights.

Although Moser doesn’t yet have a concrete answer to what a globally recognisable ‘Ningxia style’ should stand for, he believes that his attempt with ‘more freshness, elegance and finesse’ in the inaugural release of Purple Air is one step in the right direction.

Founded in: Chateau completed in 2012, first vintage was 2008. The 2015 crop was chief winemaker Lenz Moser’s first vintage at the chateau.

Vineyard: 250 hectares total, with 60 hectares on the estate and a further 190ha of contract vineyards managed by the chateau.

*Distributed by Bibendum Wine in the UK.

Wine tourism facilities: The chateau has a visitor centre with an interactive museum illustrating the history of Chinese winemaking and the history of Changyu, dating to its foundation in 1892 by Zhang Bishi.